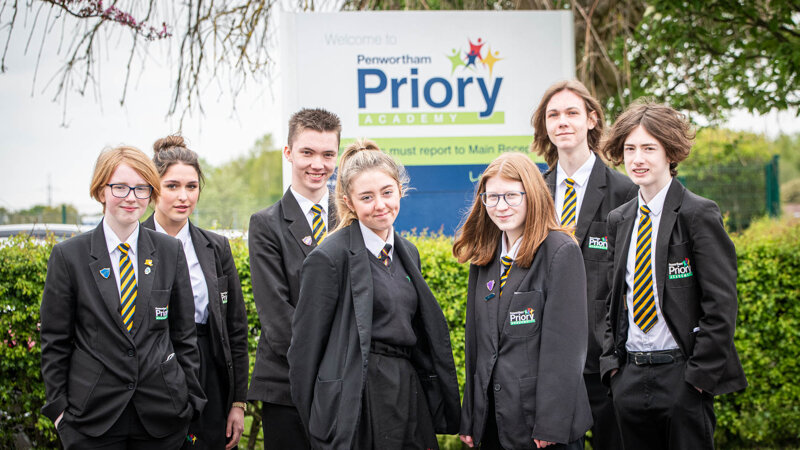 From a photographer, to a translator, to an architect, to a police dog handler – that’s just four of the jobs our outstanding Year 11s are striving for.

We asked a selection of our Year 11s which career path they would like to follow and we received a variety of replies – including one pupil who wants to be Priory’s Head of English!   Here's what they said:

Will (hiding behind the camera!) said: “I want to be a photographer. I already take photographs of cars, especially classic cars, and cover basketball at UCLan. It’s something I have been interested in in the last few years and I have been watching videos on-line to try and improve. I have been accepted at three colleges to study photography and media studies at A-Level.”

Kelsey wants to study Public Services at Preston’s College in the hope of being a dog handler in the police force. “I have two dogs at home, both Yorkipoos, but I have been promised a German Shepherd puppy if I do well at my GCSEs to train it up. I love dogs and I have always wanted to help people and make the world a better place so this combines both.”

Jazmin has captained the Lancashire Under 16s football team and played for Blackburn Rovers girls before she was snapped up by Everton recently on a two-year scholarship. “I had trials and Everton offered me a scholarship and I will go to college at St Helens to study a BTEC in Sport. It’s life-changing for me and I am really excited. My dream is to be a professional footballer.”

Jack is going to Newman College, in collaboration with Lancaster University, to study Maths, Further Maths and Computing. “I want to be a programmer. I like the logic behind computers, being able to create whatever you want with a few lines of code.”

Deputy Head Boy, Bailey hopes his job as a translator will take him around the world. “I have a passion for languages. I study French in school and I am learning Italian and Spanish on-line in my own time. I want to help people read text or books in other languages and I also have a passion for travel so it will open up opportunities for me.”

Jacob enjoys sciences and wants to go to Medical School.  “I want to study A-Levels in Biology, Chemistry, Maths and Philosophy at Runshaw College. I would like to go into the research field and see where I fit in. There is a massive scope. I want to help people as well.”

Deputy Head Boy, Matthew wants Mrs Gidden’s role!  “I aim to be Head of English somewhere, maybe Priory. I will be good! I love English and my favourite book is 1984. I want to go to Newman College to study English Language, English Literature, Maths and Biology.”

Lara’s dream is to be a cosmetic surgeon. “I won’t lie, they make money! I wanted to be a vet but recently I have decided to go into plastic surgery, whether it’s to help, for example, burns victims or maybe the cosmetic side of it. I hope to go to Newman College to study Biology, Chemistry and Psychology A-Levels.”

Head Boy Charlie is also looking at the financial aspect of his career. “I want to be an architect. I have always been interested in designing and drawing buildings so this is perfect. Designing houses is a way to make money as well!  My family is full of engineers so it is a similar type of field. I want to go to Runshaw College and study Maths, Art and 3D Design.”

Ellie’s focus is to own her own nursery. “I aim to go to Newman College to study Childcare. I have younger siblings and I enjoy working with children, with my ambition to eventually own my own nursery.”

Hannah has been learning Japanese in her spare time! “Japanese is tricky as there are three different alphabets but once you have learnt them it is easier. I have a mentor who comes into school to support me and I do a bit every day and am taking my GCSE in Japanese. I  have also applied to go on a Girlguiding international trip to Japan; I am a Young Leader. While I would like to work in Japan, I am going to Newman College to study History, Sociology and English."

Eleanor wants to work in the fashion industry and has secured a coveted place at the Rare School of Fashion & Art in Liverpool. “Fashion is just amazing, I have always loved it since I was in primary school and it’s something I have wanted to go into since then. I looked into colleges and got asked for an interview and took my portfolio over. I was really pleased to get a place. My dream is to go to London School of Fashion or St Martin’s in London.”

Head Girl, Darcy knows where she wants to be – on Broadway! Darcy has had lead roles in the school productions ‘We Will Rock You’ and ‘Matilda.’ “I want to go to Runshaw College and study Musical Theatre, the auditions are in July. I come to life on stage!”